The UK’s Prince Charles and his wife Camilla met with German President Frank-Walter Steinmeier in Berlin on Sunday, with the heir to the British throne taking part in commemorations for Germany’s Day of Mourning (Volkstrauertag). Charles also addressed German lawmakers in a speech delivered partly in German.

“The United Kingdom had chosen a future outside the European Union,” the prince told German lawmakers. While the relationship between Germany and the UK is changing, it will “remain strong” he added.

“The character of this relationship is subject of negotiations between our governments and its nature is determined by the continuing links between our people,” the prince said, speaking in German. “We will always be friends, partners and allies.”

The ties between Berlin and London has been under a degree of strain recently due to souring Brexit negotiations.

Remembering ‘all victims of conflict and tyranny’

Earlier in the day, Charles and Camilla met with President Steinmeier and his wife, Elke Buedenbender, at Bellevue Palace.

“We Germans are deeply grateful to Prince Charles and Duchess Camilla for this extraordinary gesture of reconciliation and solidarity in extraordinary times,” the German president said.

“We are united by the wish to maintain the close partnership between the United Kingdom and Germany.”

Shortly afterwards, the two couples headed for the Neue Wache memorial in central Berlin where Charles placed a wreath for the victims of war. Within the wreath lay a handwritten card from the prince with the words: “In everlasting remembrance of all victims of conflict and tyranny. Charles.”

The British royals had announced their arrival in the German capital with tweets in both English and German. The couple was greeted by the British ambassador to Germany, Jill Gallard, at Berlin’s Brandenburg airport on Saturday evening.

From foes to friends

Saturday was also Prince Charles’ 72nd birthday which he celebrated in a more modest fashion, in accordance with coronavirus restrictions. The prince tested positive for the virus in March, although he suffered only mild symptoms. 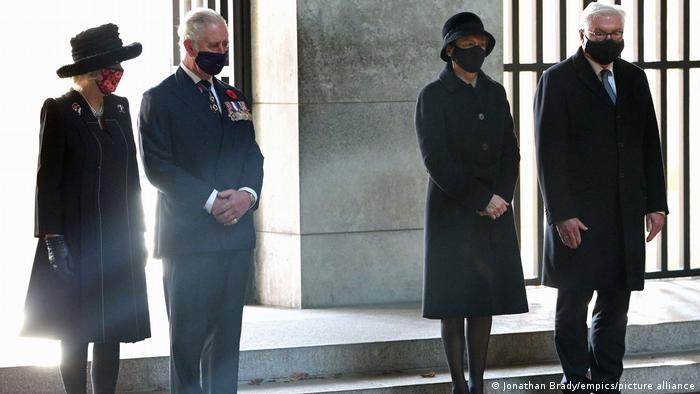 The Duchess of Cornwall, The Prince of Wales, Elke Buedenbender and President Frank-Walter Steinmeier at the Neue Wache Central Memorial in Berlin

2020 marks 75 years since the end of the Second World War and the invitation to the British royal to give a speech at the ceremony is intended to shine a light on British-German relations — from enemies in war time to firm economic and political allies.

Remembering those who died

The German National Day of Mourning takes place every year two Sundays before advent. The tradition began in 1919 to remember the fallen of the World War I. 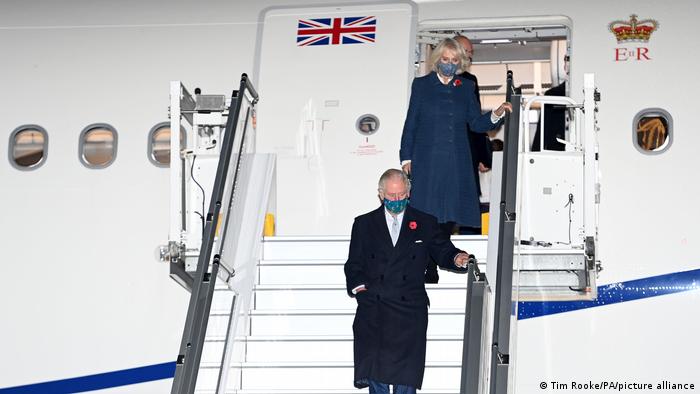 The Prince of Wales and the Duchess of Cornwall kept their masks on as they arrived in the German capital.

For this year’s ceremony, the president changed the official text in order to include victims of political, Islamist, racist and anti-Semitic attacks in Germany in recent years.

Charles spoke in similar tones. “We must be resolute in addressing acts of unspeakable cruelty against people for reasons of their religion, their race or their beliefs, wherever they occur in the world.”

Charles and Camilla last visited Germany in May 2019. He has visited over 30 times since 1962, both in an official capacity as well as for personal reasons.

Steinmeier attended the British official ceremony to commemorate a century since the end of the First World War in London in 2018.