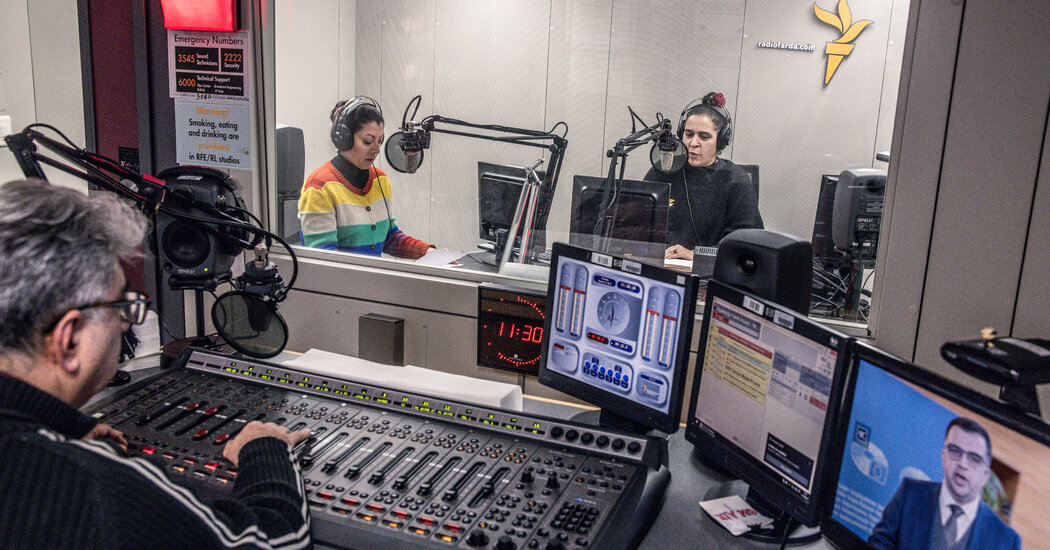 Radio Free Europe/Radio Liberty, a news network originally set up as a C.I.A. operation early in the Cold War, is experiencing a renaissance and making a case for its independence. 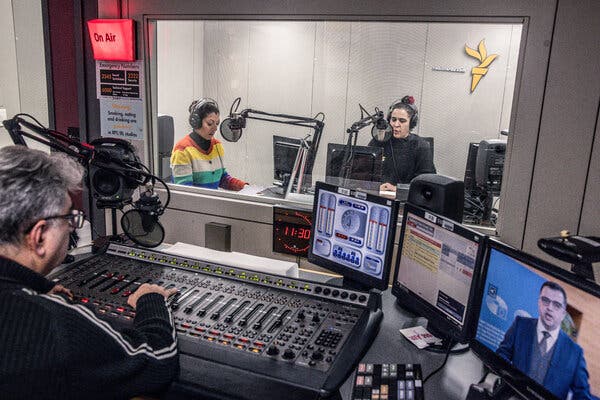 Anyone who didn’t live through the Cold War might find the Portuguese Netflix spy thriller series “Glória” improbable.

Deep in the Portuguese countryside, in the tiny village of Glória, a complex radio transmission operation run by Portuguese and American engineers springs up in the 1950s, a branch of a Munich-based news organization called Radio Free Europe.

It broadcasts news and anti-communist messages in languages of various Soviet republics, but, in the show and in real life, that’s only part of its early mission: It’s also a C.I.A. front.

Until 1971, Radio Free Europe was a covert U.S. intelligence operation seeking to penetrate the Iron Curtain and foment anti-communist dissent in what was then Czechoslovakia, in Poland and elsewhere.

The C.I.A. stopped funding Radio Free Europe when its operation was revealed. Since then, the news organization has been funded by the United States Congress and has had editorial independence.

Radio Free Europe/Radio Liberty — or RFE/RL — now barely resembles its historical predecessor, as dramatized in “Glória,” but it is still very much pursuing its mission of fact-based journalism by local reporters, in local languages for local audiences across the former Soviet sphere and Central Asia.

The organization is now based in Prague instead of Munich, and is growing, opening new offices this month in Riga, Latvia, to host a big part of its Russia-focused staff.

An editorial meeting in mid-January at RFE/RI headquarters in Prague. Some in the younger generation of journalists who left the Moscow bureau feel relief at having relocated to Prague safely before the Russian invasion of Ukraine.Credit…Akos Stiller for The New York Times

These days, RFE/RL is only partly a radio broadcaster, although in some regions, the airwaves are still how people access it. The majority of its Russian-language audience finds its reporting online, especially through social-media platforms.

At the Prague offices, high gates, tight security checks and U.S. flags waving up front leave visitors little doubt that they are entering a building with American ties.

But this great gray marble-and-concrete cube — just up a hill from where Franz Kafka is buried — holds a modern newsroom that reaches millions of people each week.

The outlet says it draws an average of 40 million people weekly through its programs and channels, broadcasting in 27 languages and 23 countries “where media freedom is restricted, or where a professional press has not fully developed.”

Russia’s invasion of Ukraine last February both shook up Radio Free Europe’s operations and highlighted its mission’s importance. Within days of the invasion, the organization suspended its operations in Russia. It had already faced years of growing pressure from Moscow and evacuated most staff to Prague and other offices even before the war broke out.

Jamie Fly, the broadcaster’s president and chief executive, has long been in firefighting mode.

“The challenge we’re facing now, and the invasion of Ukraine, is just the latest iteration,” Mr. Fly said in an interview late last year. “We are increasingly getting pressure when we’re operating in these environments, and in some cases, we’re getting pushed out of countries. That’s always been a challenge for us.”

Andrei Shary, director of RFE/RL’s Russian Service, at the office in Prague. “We are nobody’s agent,” he said last year in objecting to Russian measures against the broadcaster’s operations.Credit…Akos Stiller for The New York Times

Strictures in Taliban-led Afghanistan and authoritarian Belarus are among the broadcaster’s other severe challenges.

According the RFE/RL, Russia’s invasion of Ukraine has brought in new audiences, despite the fact that its engineers have to work constantly to get ahead of censors by finding new ways to circumvent prohibitions in Russia and elsewhere.

In the first week of Russia’s invasion of Ukraine, traffic to RFE/RL websites almost tripled to nearly 70 million, compared with the same week in 2021, the organization said. More than half of that traffic came from Russia and Ukraine.

Those gains have stabilized since then. From the start of the war through the end of 2022, viewership of Current Time, RFE/RL’s flagship Russian-language channel, more than tripled on Facebook and more than quadrupled on YouTube, where it remains accessible within Russia, according to RFE/RL.

The broadcaster’s work in Central Asian countries like Kyrgyzstan has been impactful, especially in uncovering corruption. The local network was blocked for two months last year by the Kyrgyz government on accusations that it breached a “fake news” law. Radio Free Europe/Radio Liberty rejected the claims and, as it did in Russia, encouraged its audience to use VPNs to continue following its journalism.

And while its coverage of the war in Ukraine is a crucial part of its offerings, the organization’s most distinctive service is its region-specific programs broadcast in the local vernacular, including those focusing on Russian areas like Chechnya and Tatarstan.

This approach — even for languages spoken only by small populations — has long been a key feature of Radio Free Europe/Radio Liberty operations.

The broadcaster says it draws an average of 40 million people weekly through its programs and channels in 27 languages and 23 countries.Credit…Akos Stiller for The New York Times

Toomas Hendrik Ilves, a former president of Estonia who worked for the broadcaster in Munich from 1984 to 1993, said that reaching those audiences with objective, quality news, in their own languages, was particularly vital.

“RFE/RL’s role is most important in providing objective information in the native language — and is the same role it had 30 years ago,” he said in a phone interview last week.

He added that this mission became more critical for audiences without the many information outlets that the Russian-speaking world has. “There are limited sources of quality information for others, and being able to hear quality news reporting in your own language is important,” he said.

And, as in Mr. Ilves’s time at the organization, its 21st-century incarnation is a kind of Noah’s ark for journalists and émigrés from a vast region undergoing another period of epochal change.

On March 6, 10 days after Russia invaded Ukraine, RFE/RL announced it would suspend its Moscow operations after the local authorities began bankruptcy proceedings against it, citing millions of dollars in unpaid fines over the organization’s refusal to comply with a 2021 order to label itself and some of its staff as foreign agents.

“We are nobody’s agent, and we considered — and continue to consider — this labeling demand to be censorship, an attempt to interfere in editorial policy,” Andrei Shary, director of RFE/RL’s Russian Service, said at the time.

Mr. Shary, who describes himself as a “proud Russian,” has made a home in Prague, as have some of his other Russian colleagues.

The news organization’s most distinctive service is its region-specific programs broadcast in local languages.Credit…Akos Stiller for The New York Times

Mr. Fly, the chief executive, thinks Mr. Shary would most likely be jailed if he returned to Russia. It’s a reality Mr. Shary confronts with stoicism, even though, he says, “I’ll probably never get to see my mother alive again.”

Some in the younger generation of journalists who left the Moscow bureau feel relief at having relocated safely before the invasion, avoiding the panic of friends who fled overnight.

Anastasia Tishchenko, 29, a human-rights reporter, said she struggled with the decision to relocate to the broadcaster’s office in Prague in 2021. It was a time when “you could feel some kind of danger” because of Russian pressure on the network, she said. “But you still didn’t see anything specifically dangerous to you.”

“Now I think that it’s one of the best decisions in my life,” she said in an interview, adding, “All of my friends who are well-educated, if they had opportunities, they escaped, living in Germany, Turkey, Portugal — but not in Russia.”

Ms. Tishchenko’s heartbreak has been that she has had a falling out with her parents over Russia’s invasion of Ukraine. Her parents, who were born in Ukraine, believe the Kremlin’s version of events — that Russia is conducting a liberation operation fighting against an oppressive government in Kyiv, and winning. It is a divide that is playing out among countless families.

She said she didn’t know if she would ever be able to go home to Russia and tried instead to focus on her work in Prague as part of a supportive community of people like her.

“To dream about one day going home, to walk on the streets I grew up in, to play with my sister’s child, that’s just a dream,” she said.

Anastasia Tishchenko reading the news at RFE/RL. Of her move to Prague from Moscow, she said, “I think that it’s one of the best decisions in my life.”Credit…Akos Stiller for The New York Times